My name is Loghlen Rickard. My Mom started ScienceWithMe! to keep me busy and out of other mischief when I was 3 years old.

I guess I was the first Me! in ScienceWithMe!

This year we are spending our Christmas in sunny Miami so I have decided to make use of those interesting chemistry tricks my Mom has taught me over the years and make my own snow.

Our dog Licorice is currently being house trained. This appears to be a never-ending process. My Aunt Lucie bought these training pads for her, which she never uses (she prefers the couch, we don’t spend a lot of time on the couch anymore). Anyway, I am going to use the pads now to make my Christmas snow.

What You Will Need?

You will need: A training pad (If you don’t have a training pad around you can buy some adult diapers which come in handy on long car rides or if you are World of War Craft player on a huge mission! I’m personally obsessed.)

Ok lift up the lining of the training pad or diaper. Inside you will find the wonderful highly absorbent chemical sodium polyacrylate. Sodium polyacrylate is super absorbent polymer that can absorb 1000 times its own weight in liquid. It consists of chains of molecular units called monomers. When water or liquid is added to sodium polyacrylate, it absorbs and swells.

This polymer was invented in 1966 by a group of Dow Chemical Company chemists who patented it for use in making better diapers. And babies' bottoms have been dry ever since.

Ok, to make the snow we remove the layer of polymer from the pad. Take the layer of it out and put it in your aluminum tray. Then add your cup of water and mix it wound with the spoon. Yum! As you can see it looks like snow. And it’s nice and cold like snow too. It’s also non-toxic but as Mr. Heisen–Bear told me when I was 3 years old –Never Ever Taste Any Chemicals. Scientists NEVER use the taste test. Just because the substance is non-toxic doesn’t mean it’s edible!

Actually, it’s a bit gooey. That’s because the diaper companies changed the formulation to make it better for bums, but less like snow. Now there is a product you can buy, fake snow, which is essentially the same polymer, but it’s formulated specifically to be more snow like. It comes in a pouch and you just add water and…voila! Instant snow.

Now that I’ve made my fake snow, I am going to place around our Christmas tree. Maybe Licorice will find some use for it. Licorice!!!

Well that’s all from my brother Luke, my sister Leah and our dog Licorice down here in snowy Miami. Happy Holidays to you all. 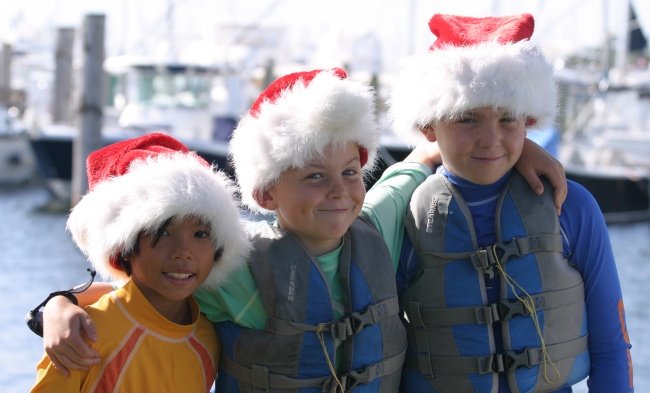