Have you seen pictures or videos of Albert Einstein?

If you have, then you would know where the famous image of a genius scientist with messy hair and big glasses comes from. This popular image can also be called the Einstein look. Einstein is one of the most famous scientists of the modern world because his ideas changed the common beliefs in physics.

Who is Albert Einstein?

Albert Einstein is a scientist of German-Swiss ancestry, who later on became an American citizen. He was a physicist, a philosopher and an author. During his lifetime, he published over 300 scientific papers and 150 non-scientific ones. Because he was very talented, creative and innovative, many people now associate “Einstein” with the word genius. 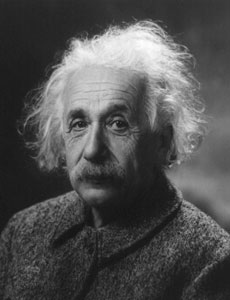 What happened during Einstein’s childhood?

Einstein was born in the German territory called Ulm on March 14, 1879. His parents were Hermann Einstein and Pauline Einstein. His father was an engineer who, together with his uncle, owned a company that sold electrical equipment using direct current. It is said that during his early years, Einstein had a difficult time speaking and probably had a condition called “dyslexia”. However, this did not prevent him from becoming the top student in his elementary school. When Einstein was 10 years old, he met Max Talmud, a Jewish medical student who came from Poland. Talmud ate meals at the Einstein’s home every week. Every time Talmud visited, he would show his science, mathematics and philosophy books to Einstein. It is probably during this time that Einstein became interested not only in science but in philosophy and the other social sciences.

What happened during Einstein’s schooling?

Initially, his father wanted him to take electrical engineering at Luitpold Gymnasium in Munich, Germany. However, he did not like the school because he felt that he was not given enough freedom to learn. So he quit this school! Later on, he applied to the Eidgenössische Polytechnische Schule (ETH), a school in Zurich, Switzerland. You might have heard that Albert Einstein once failed an entrance examination. This is true. When he took the entrance test at EHT, he failed, even though he got excellent marks in physics and mathematics. He then went to Aarau, a place in northern Switzerland to finish high school. It was there he studied the Electromagnetic Theory. This gave rise to the foundation of his ideas in his adult years. He graduated when he was seventeen years old. After graduation, he studied for four years in Zurich, Switzerland to become a mathematics and physics teacher.

Why did Einstein change citizenship?

Being stateless means having no citizenship. Albert Einstein was a German citizen because his parents were German and he was born in Germany. However, in 1896, after graduating from high school, he renounced or gave up his German citizenship and became stateless. He did this in order to avoid being forced into military service. It was only in 1899 that he applied for Swiss citizenship, which was finally granted in 1901. However, he was still required to render military service. This time around though, he was able to show that he had varicose veins and his feet were flat in order to avoid going to the military. In 1940, Einstein officially became an American citizen, after being forced to immigrate to the United States during World War II.

What happened during the professional life of Einstein?

Although he planned on becoming a professor at EHT, Einstein was not accepted. Instead, he worked at a patent office and evaluated patent applications. A patent is given to a new invention, and gives several exclusive rights to the inventor, in exchange for the inventor disclosing public knowledge of that invention. Einstein worked as a patent officer from 1902 to 1909. During this period, Einstein wrote many scientific papers. In 1905 he was given a doctorate degree (Ph.D.) by the University of Zurich after submitting his work entitled “On a new determination of molecular dimensions”. He was able to publish three papers during this year. These papers included discussions on electromagnetic radiation, special theory of relativity and statistical mechanics. These were based on the works of the well-known physicists Max Planck, James Clerk Maxwell, Josiah Gibbs, and Ludwig Boltzmann. In 1911, Einstein finally became a full-time professor of the Karl-Ferdinand University in Prague. During this year, he was able to find evidence for his special theory of relativity. His proof stated that the light from another star would bend when it passes near the Sun because of the Sun’s gravity. This was witnessed in May 29, 1919, during a solar eclipse. In 1914, Einstein became the director of the Kaiser Wilhelm Institute for Physics in Berlin. He served this post until 1932. He also became a professor of the Humboldt University in Berlin. From 1916 to 1918, he served as the president of the German Physical Society. In 1933 he moved to the United States to escape the Nazis in Germany. He spent the remaining 22 years of his life at the Institute for Advanced Study in Princeton N.J. until in 1955.

What were the awards received by Einstein?

Einstein received the Nobel Prize in Physics in 1921. Some people believe that he received this award because of his special theory of relativity. However, because many people were not yet convinced during that time, he was officially awarded the Nobel Prize for his work on the photoelectric effect. In 1925, he received the Copley Medal, an award from the Royal Society of London for his outstanding achievements in physics.

What is the relationship of Einstein and the atomic bomb?

Several months before World War II began, Einstein sent a letter to President Roosevelt to warn him about the development of an atomic bomb. Einstein recommended that the US should begin nuclear research. This started what is called the Manhattan Project, where the US became the first country to develop and use nuclear weapons. Before his death on April 18, 1955, it is said that Albert Einstein eventually regretted writing the letter and assisting in the Manhattan Project, calling it his “one great mistake.”