Asteroids are bodies of mass in our solar system that are composed of rock and metal.

Asteroids have been in orbit around the planets Mars and Jupiter for thousands of years. Because they are nearly the same shape and are also composed of the same matter as that of planets, asteroids have been described as minor planets or planetoids. These planetoids mostly orbit in what is called the asteroid belt, which is found in the middle planets Mars and Jupiter. Would you believe that the asteroid belt has millions of asteroids orbiting in it? Because of the gravitational pull of the planets around the asteroid belt, some asteroids crash into each other, which cause these to either become smaller or fall out of the orbit. Sometimes, asteroids can even pass through the Earth’s orbit! 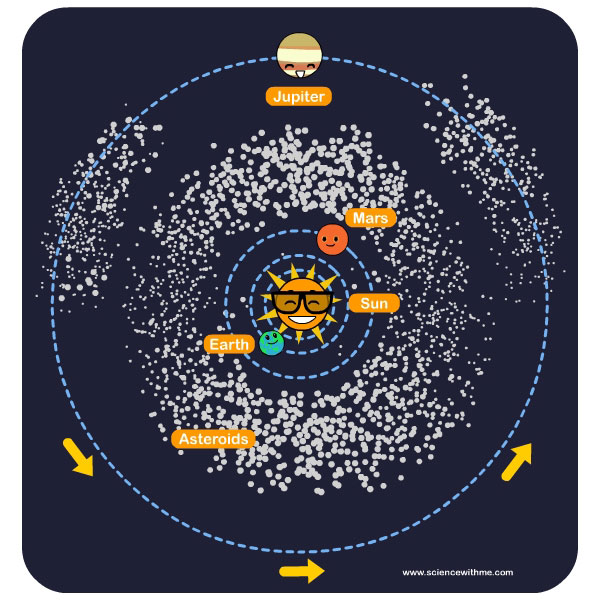 Asteroids come in all shapes and sizes. Some are immensely large and round, appearing just slightly smaller but very similar in form to the planet Earth while others are just about the size of a small country or state. For the most part, almost all asteroids are fairly small. Certain asteroids may be orbiting closely together for hundreds of years. At the same time several asteroids may be moving extremely far apart from each other. When you look carefully, you can see big craters and voids in asteroids. They look like huge chunks of solid rock that’s been carved and dug, floating into space. Asteroids appear dark grey to brown in color. This is because of the substances that form its structure. All asteroids have practically the same make-up except for some that may contain fewer quantities of a particular metal. For example, most asteroids usually have an equal combination of metals but some may have more nickel than iron.

Meteoroids are masses of rock that seem very similar to asteroids, except they’re smaller. Meteoroids are the smallest of all floating fragments in our solar system. Have you heard of shooting stars? Shooting stars are actually meteoroids passing through the Earth’s orbit. On a clear night, you can take pleasure in watching meteor showers up in the sky. A Meteoroid travels fast as it penetrates the Earth’s atmosphere. When a meteoroid goes through the atmosphere, it starts to flicker as the temperature of the Earth triggers a chemical reaction with the particles surrounding the meteoroid. Heat from the Earth’s atmosphere burns up the meteoroid and as a result, it suddenly appears bright and shining that it looks like a star falling down the sky. At this point, it is called a meteor. Right when the meteor lands on the ground without breaking apart, it will be called a meteorite.

How are asteroids and meteoroids formed?

There were many assumptions on how asteroids are formed, but one theory was that there used to be a smaller planet that existed between Mars and Jupiter. When this was proven wrong, scientists thought that asteroids came from an exploded planet. Nowadays it is believed that asteroids are portions of solid mass that failed to combine to become a planet. Meteoroids on the other hand are said to come from asteroids that shattered into pieces when they smashed into other asteroids in orbit.

What is the difference between asteroids and meteoroids?

You can say that asteroids and meteoroids are nearly the same. They have the same components and behave the same in space. One significant difference though between asteroids and meteoroids is their volume and size. Asteroids are way bigger than meteoroids, because there are some meteoroids so small they are no bigger than dust particles. Also, meteoroids usually appear in the Earth’s skyline more often than asteroids. Asteroids sometimes crash on to the moon’s surface, creating hollows and craters in it. If an asteroid ends up losing its orbit and orbits the Earth, this might end up causing destruction to the planet. It’s scary to think about it, but currently astronomers are seriously studying the behavior of space debris including asteroids to avoid a catastrophe. 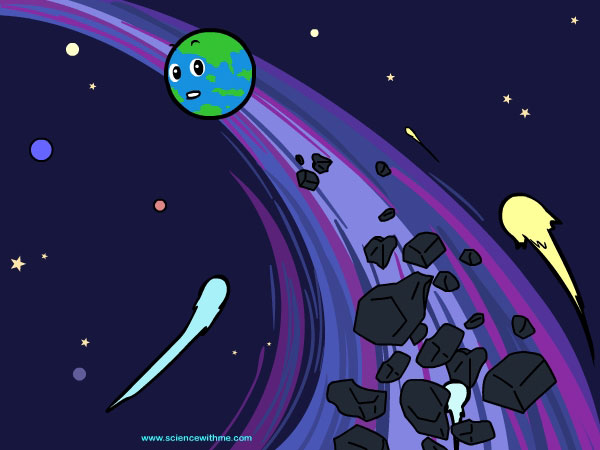 How can we prevent a collision between asteroids and the Earth?

It may seem impossible, but astronomers are now carefully investigating how to calculate the exact time when asteroids might go through the Earth’s orbit to avoid potential disaster. They are using information from previous crashes of debris in space and the behavior of asteroids to examine the likelihood of a collision. Our task is to support our scientists in their quest to know more about our solar system, while staying calm and being prepared. Studying asteroids and meteoroids allows us to understand how researching about science can improve our way of life. Science is an exciting and fun subject to learn, so why don’t you go check out our science animations or download our great Introduction to Astronomy e-book.