Have you heard the story about a scientist who flew a kite during a thunderstorm in order to prove that lightning is actually electricity?

This scientist was actually Benjamin Franklin, or simply Ben Franklin, one of the Founding Fathers of the United States. However, his work was not limited to electricity. You learn about some of his other interests in our free downloadable handout found below or read more about him here. He was a great politician, statesman, printer and a writer of the genre called satire.

How was Benjamin Franklin’s early life?

Benjamin was the son of Josiah Franklin, a candle and soap-maker, and Abiah Folger. Benjamin was their eight child, born on January 17, 1706 in Boston, Massachusetts. Benjamin’s family were Puritans, which meant they believed in Puritanism. This was a Protestant movement, which aimed to get rid of the influence of Roman Catholicism on Protestantism. The principles of Puritanism were later on used to develop the United States as a state. When he was a child, Ben Franklin was sent to school for two years. He then attended the Boston Latin School but was not able to graduate, probably because his family did not have enough money. Instead of going to school, he helped his brother James in the printing trade and read whenever there was no work to do. James Franklin eventually began printing the newspaper called “The New-England Courant”. Ben wanted to write for this newspaper but his brother did not allow him to do so. However, Ben was creative. He began writing letters for the newspaper by assuming the identity of a widow named “Mrs. Silence Dogood.” When Ben was discovered, he left Boston and ran away to Philadelphia, Pennsylvania. 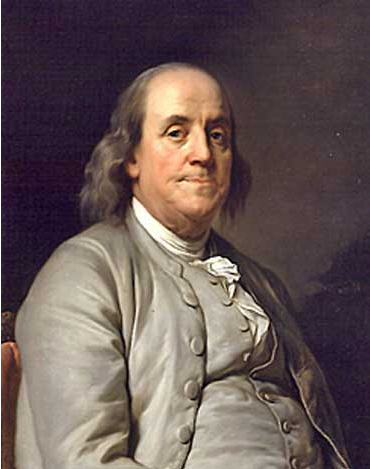 What was the Junto?

The seventeen-year old Ben also worked in a printing house in Philadelphia. He then went on to London and worked as a typesetter but came back to Philadelphia in 1726. In 1727, the twenty one-year old Ben established the group called “Junto”. The members of Junto met together in order to discuss issues for the improvement of their community. They liked reading as well and they created their own library. However, this was not enough. Eventually, through Ben’s idea, the Library Company of Philadelphia was formed, which allowed many people to borrow and read books.

How was Benjamin Franklin’s life as a printer?

The first job of Benjamin Franklin was as a printing assistant to his brother. Later on, he set up his own printing house and published the newspaper “The Pennsylvania Gazette”. His commentaries and essays earned him respect from the community. His love for his printing work was evident from the way he signed letters with the name “B. Franklin, Printer.” However, he retired from the printing business in 1747 and focused on his other businesses.

What books did Benjamin Franklin write?

What were Benjamin Franklin’s inventions and discoveries?

Why is Benjamin Franklin called “The First American”?

Ben Franklin is called “The First American” because he was a major voice in uniting the colonies, which later on formed the United States of America. Later on, he served as the first U.S. Ambassador to France. He also greatly contributed to the principles upheld by the whole United States including hard work, education, thrift, community spirit, self-governance and opposition to political and religious authoritarianism. His belief in these principles was rooted in his Puritan upbringing and his confidence in the western philosophy called Enlightenment.