Black holes can be best described as a sort of vacuum, sucking up everything in space.

You know how a vacuum sucks dirt, dust, toys, clothes and other objects when Mom or Dad uses it to clean the living room? That’s exactly how black holes are! Many people think about black holes as an intense void in space, where emptiness reigns. Others imagine you can travel through time and space inside a black hole. Black holes have been described in television shows, cartoon series and storybooks as magical. In most instances, black holes are portrayed as a place where you can turn back time or fast-forward to a later date. None of these are true! Black holes are in fact the only entity in space where matter can get completely jam-packed. Because it traps and pulls in debris from space, black holes are entirely dense and solid. The reason why these are called black holes is because it shuts in everything that can travel through space, including light. Light waves that may approach or get near a black hole will eventually be captured by it, and never escape. Nothing, not even light, can get out of a black hole! How does a black hole trap matter in it? It’s because the gravitational pull in black holes is powerful enough to catch anything and everything that passes by. This is probably where writers and adventurers thought of black holes being a way to do time travel – because everything can get sucked in and nothing can escape, time literally stands still.

How are black holes formed?

Scientists have discovered that black holes come from an explosion of huge stars, such as a supernova. Stars that are near death can no longer burn due to loss of fuel, and because its temperature can no longer control the gravitational force, hydrogen ends up putting pressure onto the star’s surface until it suddenly explodes then collapses. The star gets smaller and smaller until eventually all that’s left is a compacted object, or even specks of dust. Big stars can end up becoming small black holes, so the size of a black hole depends on the total mass it had before it exploded and shrunk. The moment this happens, the star’s mass is duly compressed and condensed in that form. It’s possible to have a star as big as the Sun shrink to less than a third of its size!

What are Black Holes made of?

Black holes come from stars that are made of hydrogen, other gases and a few metals. When these explode it can turn into either a stellar-mass black hole, which can only occur if the star is large enough (should be bigger than the sun) for the explosion to break it into pieces, and the gravity starts to compact every piece into the tiniest particle. Try to see and compare: if a star that’s ten times the size of the sun ends up being a black hole that’s no longer than 70 kilometers, then the Earth would become a black hole that’s only a fraction of an inch! Super-massive black holes are considered to exist in the middle of all galaxies. Scientists think there is one in the Milky Way, too. These enormous, colossal black holes are said to be capable of holding matter equivalent to more than 50 million suns!

What happens when an object enters a black hole?

Objects that get sucked in a black hole will always remain there, never to break free. But remember that black holes can only gobble up objects within a specific distance to it. It’s possible for a large star near the sun to become a black hole, but the sun will continue to stay in place. Orbits do not change because the newly formed black hole contains exactly the same amount of mass as when it was a star, only this time its mass is totally condensed that it can end up as no bigger than a state. 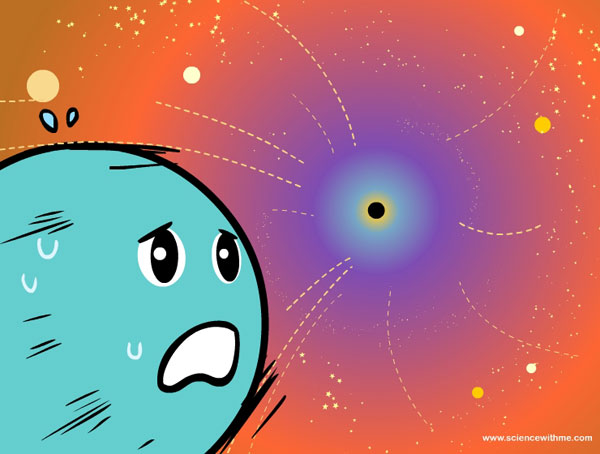 Is there proof that black holes really exist?

So far, astronomers have figured out that black holes exist because of Albert Einstein’s theory of relativity. In the end, through numerous studies, they have discovered that black holes truly exist. Since black holes trap light and do not emit light, it is nearly impossible to detect black holes via a telescope. But astronomers continue to study galaxies, space and the solar system to understand how black holes might evolve. It is possible that black holes can exist for millions of years, and later contribute to a bigger process in galaxies, which can eventually lead to creation of new entities. Scientists also credit black holes as helpful in learning how galaxies began to form. Science can be a fascinating topic, as we all get to know the origin of things and help us understand how important these are. Knowledge is important, so go ahead and explore www.sciencewithme.com to learn more about the world we live in. While you’re at it, why not download our our great Introduction to Astronomy e-book to quench your child’s thirst for science!