In your daily activities, you probably use the term “bonding” to refer to the activities you do with your best friends aka “bonding sessions”.

If you have helped your dad or mom fix something in the house with glue, then you might also have used the same term. In Chemistry, this term has a similar usage. Chemical bonding refers to the way molecules or atoms are held together by different forces. You can also think of them as the natural attraction between molecules or atoms. In your body, there are chemical bonds which are formed and there are bonds which are broken. Many processes involve chemical bonds, which is why it is important to learn about them.

How does chemical bonding occur?

Everything in the universe is made up of atoms. Each of these atoms have electrons in their outer shell called “valence” electrons. Electrons are negatively charged subatomic particles. Since each atom has electrons, when one atom meets another, there is usually a repelling force. However, occasionally, the electrons from one atom interact with that of another atom. This interaction leads to chemical bonding which then joins the atoms together. Note that a single atom can have multiple interactions or bonds. Through chemical bonding, compounds are formed.

What are covalent bonds?

Covalent chemical bonding refers to the sharing of electrons between two atoms. Remember that “valence” refers to the outermost electrons of the atom while “co” means shared. Therefore, the term covalent just means that the electrons are shared. Covalent bonding occurs because the electrons, which are negatively charged, become equally attracted to the positively charged nuclei (singular nucleus) of two atoms. Instead of repelling each other, the atoms then become very attracted, leading to a stable chemical configuration involving both of them. When there is an unequal sharing of electrons, the term used is polar covalent bond or simply polar bond. An example of a covalent bond is one that occurs between the two atoms of oxygen to form oxygen gas (O2). An example of a polar covalent bond occurs in hydrochloric acid (HCl) whereby chlorine (Cl) has a greater share of electrons than hydrogen (H). 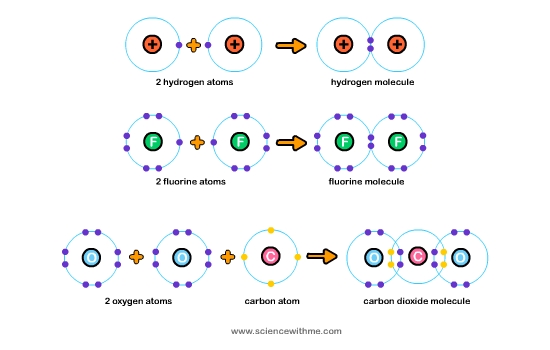 What are ionic bonds?

In contrast to covalent bonds, ionic bonds do not involve any sharing. Rather, there is a transfer of electrons. An atom is able to form an ionic bond with another atom if there is a vacancy in its outer shell, which permits the transfer of one or more electrons. The one that donates the electrons is called a cation while the one that receives the electrons is called the anion. Because the cation loses electrons or loses its negative charge, it becomes positively charged. In a parallel way, the anion gains electrons, making it more negatively charged. This opposite charges allows a strong attraction between the two atoms. An example of an ionic bond is present in table salt. Salt consists of sodium (Na) and chloride (Cl). When these two interact, sodium is positive (Na+) and chloride is negative (Cl-). These then undergo ionic bonding to form salt.

What is intermolecular bonding?

Chemical bonding is a very important concept in chemistry but it is also used in the biological and physical sciences. Learning about chemical bonds is easier if you can visualize how bonds are formed and broken and how electrons move.