What is an element?

About two and half thousand years ago ancient Greece philosophers spent their time wondering about what “everything” (i.e. matter) was made of. If they could better grasp what made up matter then they would be able to better understand the behavior and properties of matter. Plato and Aristotle (two of the most famous Greek philosophers of that time) supported the idea that all matter was made up of four basic elements in different amounts - fire, air, earth and water. Because Aristotle and Plato believed this to be the case so did nearly everyone else! Nowadays though we know that in fact none of these are elements! Water is a molecule made of hydrogen and oxygen atoms bonded together and fire, air and earth are mixtures of different molecules. So what is an element? A material made of only one kind of atom is called an element. For example in the element iron there are only iron atoms present. Similarly in the element silver there are only silver atoms present. Silver cannot be broken down further into simpler substances. The same is true for iron, gold and all of the other elements. An element can contain a single atom or it can be made up of a molecule. However if an element is a molecule the two atoms that are bonded together are identical. Molecules may contain more than one type of atom while as elements do not.

A famous chemist from Ireland named Robert Boyle (1627-1691) coined the term element. He said that elements are substances made up of only one kind of atom that cannot be broken down any further into simper substances. These are different from mixtures and compounds, which can be further broken down or separated.

How many elements are there?

There are more than 100 different kinds of atoms. Because an element is made up of only one kind of atom this means there are more than 100 different kinds of elements. Approximately 90 elements occur naturally on earth and they have been found in the earth’s atmosphere, the earth’s crust and in the plants and animals that live on earth. The remaining elements are made in special reactors in laboratories. 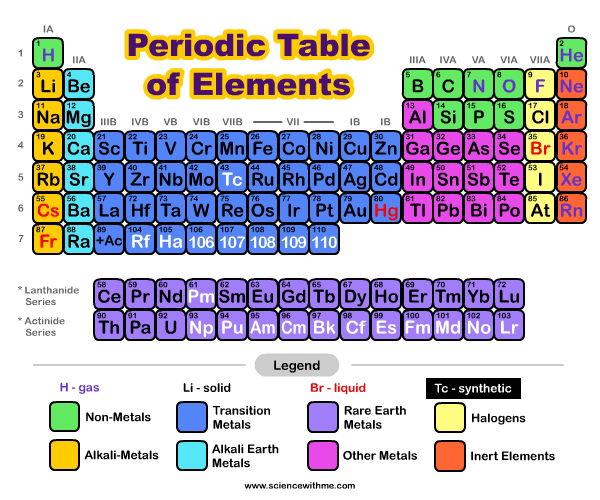 How do elements differ?

How do we write Elements?

Scientists use symbols when they are writing about elements. The symbols are abbreviations for the name of the element and every element has its own different symbol. Just in the way that many of us use symbols when text messaging or emailing to save time (e.g. brb (be right back) or ttyl (talk to you later) scientists use symbols when writing about elements to save time. An element’s symbol usually comes from the first one or two letters of its name. For example the symbol for Hydrogen is H, Helium is He, Calcium is Ca and Oxygen is O. However there are many symbols that bear no relation to their current name such as Fe for iron, Au for gold and Pb for lead. This is because the symbols came from their old names, which were often in Latin e.g. the Latin name for iron is ferrum, and the Latin name for lead is plumbum. In most elements the particles are individual atoms. However for a few elements the particles are molecules (i.e. made up of two or more of the same atoms bonded together). By reading the formula for an element we can tell if it is made up of a simple atom or of more than one atom bonded together e.g. oxygen is written as O2. This represents a molecule of oxygen. Each molecule of oxygen contains 2 atoms of oxygen bonded together.