Have you ever tried mixing chemicals together?

If you have, you probably already know that it is best to do this in a laboratory because handling chemicals can be dangerous. Moreover, a lab is set up so you can do experiments with special laboratory “apparatus” that help with measurement accuracy (an important concept in science). Some basic laboratory apparatus include the beaker, the funnel, the graduated cylinder, the volumetric flask and the balance. Many laboratory apparatuses are made of Pyrex glass but they may also be made of metal or plastic depending on their purpose. 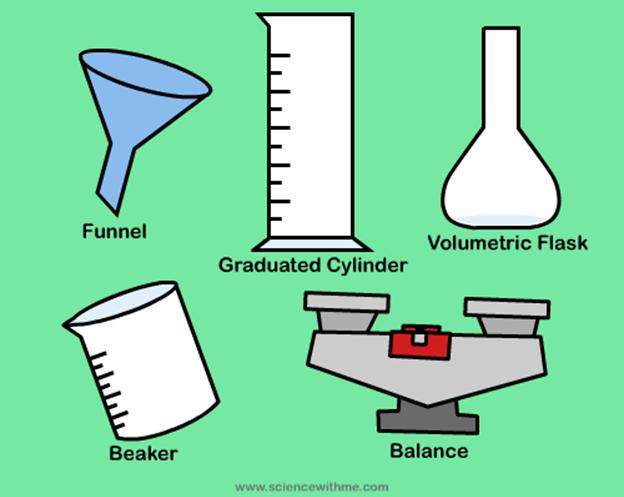 What is a beaker?

A beaker is a container used for storing, mixing and heating chemical liquids. You can measure the volume of liquids with a beaker although it is less accurate than a graduated cylinder. The basic shape of a beaker is a cylinder, with its top open for pouring. A small spout may be present for directing pouring and avoiding spillage. A small beaker may contain several milliliters (mL) but a big beaker may contain several liters (L). The amount they can contain is measured in graduations. For instance, a 10 mL beaker would have 1 mL graduations while a 250 mL would have 50 mL graduations. This means that with a 10 mL beaker, each line would indicate an increase in 1 mL from zero until you reach 10 mL. On the other hand, with a 250 mL beaker, each line would indicate an increase of 50 mL from zero (e.g. 50, 100, 150, 200) until you reach 250 mL. In terms of shape, beakers also differ. There are standard beakers (Griffin form), tall-form (Berzelius) beakers and flat beakers. The standard ones are for preparing and pouring solutions. The tall-form beakers are used in a process called titration while the flat beakers or used for bathing solutions with hot water or for crystallization.

What is a Funnel?

A laboratory funnel is similar to the one your mom or dad might use when cooking or when transferring gasoline. It has a wide and cone-like opening and a thin stem. The main function of a funnel is to prevent spillage. So for example, if you are transferring a liquid from a cylinder to another container and you do not want to spill a drop, get out a funnel. It is important to use a funnel that can withstand the weight of the material that you are transferring. it is also important that the funnel is made of an appropriate material so as not to interact with the substance you are transferring. For example a filter paper funnel may be used when transferring light powder but a glass funnel is required when you are dealing with reactive substances or liquids. Additionally, you can cover the conical mouth of the funnel with filter paper in order to remove undesired particles. This process is called filtration.

What is a Volumetric Flask?

A volumetric flask is also used to hold fluids but it is more accurate than a beaker in terms of measurement of volume. The bottom part is shaped like a bulb with a flat base while the upper part consists of a long neck. Unlike the beaker, the volumetric flask only has a single graduation mark in its neck, which indicates the volume it can accurately contain. If you want to mix liquids until a certain volume of a solution is reached, say 100 mL, this is the best apparatus to use. For instance, if you want to make a 5 gram solution of sodium chloride in water to make brine or saline solution, you will weigh out 5 grams of sodium chloride first and transfer it into a volumetric flask and then add distilled water until the volume reaches 100 mL. Most volumetric flasks can be sealed with a stopper and can be shaken in order to mix the solution inside.

What is a Graduated Cylinder?

When you simply want to measure a certain volume of liquid, the most accurate measurement can be made with a graduated cylinder. As the name connotes, this apparatus looks like a cylinder or a simple beaker but its length is much greater than its width. Therefore, it is relatively tall and narrow. It also has a spout to prevent spillage during pouring. The graduations of a graduated cylinder are smaller than that of a beaker. For instance, there is a 1 mL graduated cylinder which you can use to measure liquids with volumes less than 1 mL In reading the volume of the liquid inside a graduated cylinder, you should place the cylinder on an flat surface and your eye should be level with the lower meniscus or the lowest portion of the liquid in order to get the most accurate measurement.

What is a Balance?

While balance is a word usually used to refer to your ability to stand upright and avoid falls, in the laboratory, a balance refers to a device that is used to measure mass. It can also be called a beam balance or a balance scale. A balance usually has one pan or scale on each opposite side, suspended from a horizontal lever called a beam. The scales are at equal distances from the center of the beam. A pointer or a slider is also located at the center of the beam. This indicates the mass of the object. When doing experiments, it is important to have these laboratory apparatuses available. Make sure you know how to use them properly so that you can conduct accurate and successful experiments.