Have you ever been asked the question “What makes a monkey, an elephant, a blue whale and a human similar to each other?”

The answer is simple: all of them belong to the class Mammalia. About 5,400 species of mammals have been discovered. Mammals can be very small (example: a bumblebee bat only measures 30-40 millimeters lengthwise) but they can also be very large (example: a blue whale can measure up to 33 meters lengthwise). 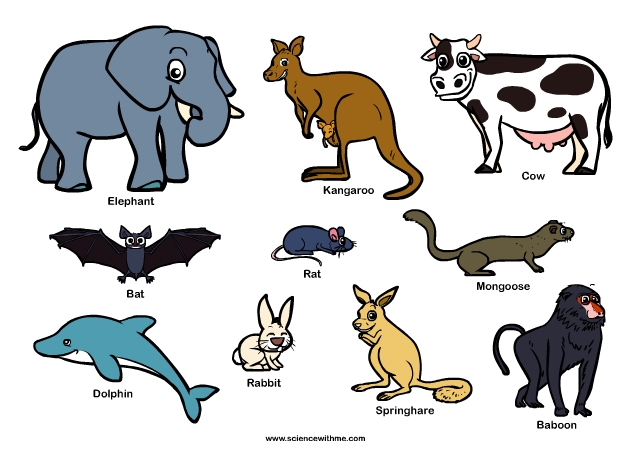 Mammals are similar to reptiles and amphibians in the sense that they are also vertebrates. However, the females of mammalian species all develop mammary glands whereas the females of reptiles and amphibians do not. The mammary glands secrete milk, which provides nourishment to newborn or young mammals. The external covering of mammals consists of hair or fur. Most mammals have sweat glands, which help them regulate their body temperatures. Other distinguishing characteristics of mammals include the presence of three middle ear bones named malleus, incus and stapes, and the presence of the neocortex in the brain. According to studies by scientists, the malleus and the incus were actually big bones used for eating by the ancestors of mammals. In modern mammals, the three middle ear bones facilitate better hearing. On the other hand, the neocortex facilitates better integration of information from the environment. These characteristics give mammals an adaptive advantage over the other members of the animal kingdom.

What are the classifications of mammals?

In taxonomy, the science of naming, mammals are divided into subclass Prototheria and subclass Theria. Prototherians include the echidna and the platypus, which are mammals that do not bear live young. Therians include marsupials and placentals, which bear live young. For simpler classification, mammals are divided into monotremes, marsupials and placentals.

Where do mammals live?

As can be worked out from the examples already given, mammals can live anywhere. Seals and polar bears can bear very cold temperatures of the Arctic. Rodents like rats and mice can live in damp and dark places. The whales and the walruses are marine mammals which means they thrive in water. Squirrels and tarsiers spend most of their time in trees; they are arboreal mammals.

What mammals can fly?

Bats are the only mammals that can truly fly. The other mammals that seem to fly include the flying lemurs and the flying squirrels but these animals can only glide. Bats, which are classified as placentals, can fly because they have adaptations for defying gravity and balancing in air. Most bats sleep during the day and are active during the night. This preference for night-time makes them “nocturnal”. The body structure of bats is especially adapted to flying. A bat has five-toed feet, which facilitate clinging upside down, wings that can measure 20 centimeters from end to end, and a light furry body.

Creative ways to help your curious kid learn about mammals: