Have you ever observed a snail travel from one point to another?

Isn’t it very slow? This is because it does not have feet which are like yours. It does not have the support and strength provided by your skeleton. A snail is just one of the many kinds of mollusks you might have already encountered. Other mollusks include the clam, the octopus and the squid.

Mollusks or molluscs belong to the phylum Mollusca. All of the members are invertebrates, which mean they lack backbones. This is perhaps the reason why they are named so. The origin of their name is the Latin word “mollis” which simply means “soft”. Indeed, even mollusks that have shells have a soft body inside. 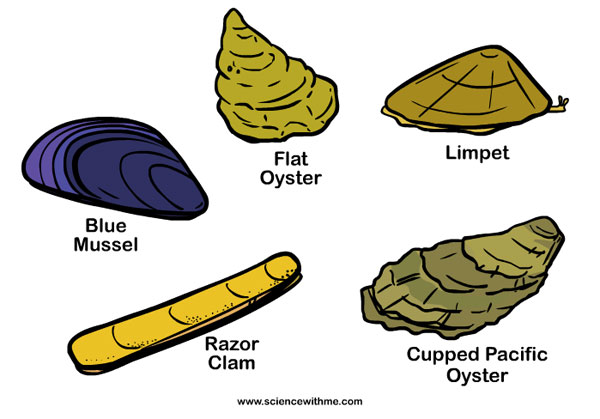 Aside from this distinguishing feature, they are also differentiated from other animals by the presence of the mantle and the unique organization of their nervous system. The nervous system of mollusks is unique in the sense that it only consists of nerve cords and ganglia. On the other hand, the mantle is an extension of a mollusk’s body wall. It is the organ that produces the shell by secreting calcium-based crystals or calcareous spicules. Beneath the mantle is the mantle cavity. Within this cavity, the mollusk’s gills, anus, and excretory pores can be found.

Where do mollusks live?

Note that gills were mentioned previously. The presence of gills allows mollusks to survive underwater. This is the reason why most mollusks live in oceanic habitats. However, many mollusks also live in freshwater and terrestrial habitats.

What are the special structures of mollusks?

Mollusks have a distinct anatomy. Aside from the shell, mantle, mantle cavity, nervous system, and gills mentioned earlier, mollusks also have a muscular “foot”. This foot has various functions but it is mainly used for movement and attachment. Most mollusks also have “radulae”. These are muscular structures used for scraping off their food from rock surfaces. In a sense, they are similar to your tongue and teeth, except that they are used for rasping rather than biting and chewing. Most mollusks have “metanephridia” which are organs for excretion of wastes. These organs are similar to your own kidneys. 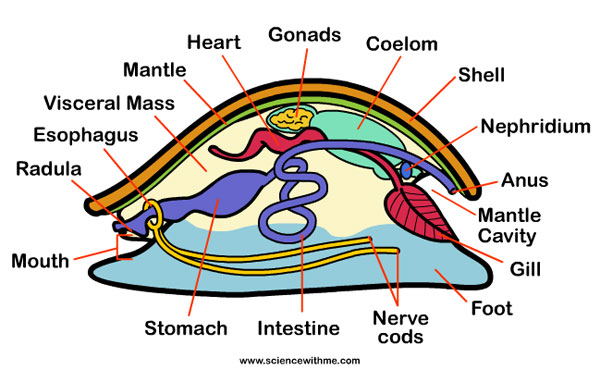 What are the classifications of mollusks?