Have you ever ridden on a balloon?

Many tourist spots offer balloon rides in order for people to see the beauty of a place from above. A balloon contains a noble gas called helium. Formerly, balloons contained hydrogen but hydrogen is very flammable and dangerous when uncontrolled. Therefore, people shifted to helium, which is safer. Helium is safe because it has the properties of the noble gases.

What is the history of noble gases?

People once believed that noble gases couldn’t chemically react at all. For this reason, they were called inert gases. They were also clustered under Group 0 in the old periodic table because scientists believed that the gases have zero valence electrons in their outer shell. This was later proven to be untrue when some noble gas compounds were discovered.

What are noble gases?

The gases are elements, which share similar properties. These properties include being monoatomic, colorless, odorless, being able to conduct electricity, and having low chemical reactivity. Noble gases include Helium, Neon, Argon, Krypton, Xenon and Radon. These are all found in Group 18, in the rightmost column of the periodic table. If you look at the periodic table, you will notice that these elements are the only ones, which do not have a charge. Helium has the lowest molecular weight while Radon is the heaviest. Helium (He) is a component of natural gas. Argon (Ar), Neon (Ne), Xenon (Xe) and Krypton (Kr) are present in the air and can be isolated through liquefaction (the process of changing a gas into liquid through condensation) and fractional distillation (the separation of a mixture into its component parts by their boiling points.) Radon (Ra) is emitted as a result of the radioactive decay of radium compounds. 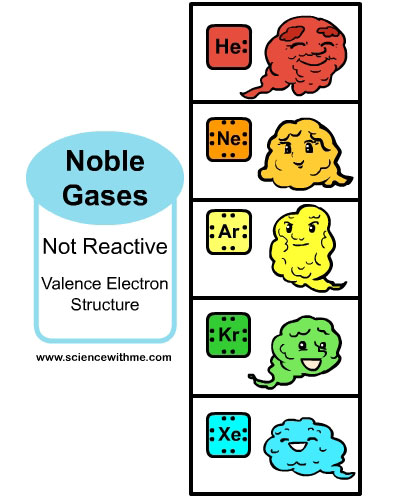 What causes the low chemical reactivity of noble gases?

What are the applications of noble gases?

Because of their properties, noble gases have many important applications. They are widely used in recreation, medicine and industries. They are mainly used in conditions that require a stable and safe element. For instance, deep-sea divers use a Helium-Oxygen gas combination in their tanks. When the diver goes beyond a depth of 55 meters (180 feet), there is a risk of Oxygen toxemia and Nitrogen narcosis. At high pressures as experienced in deep sea diving, gases like Oxygen and Nitrogen can be directly absorbed by the blood and by the tissues. Nitrogen narcosis is called such because at high pressures, nitrogen exerts an anaesthetic effect. With narcosis, the diver becomes sleepy and unable to move, which can lead to severe consequences underwater. Helium is important because it has low solubility. It does not dissolve well in fluids and in lipids, which are components of your cell membranes. Therefore, only a small amount of Helium enters the cell membrane. Helium is a component of breathing mixtures like trimix and heliox. The use of Helium for breathing gas also reduces the risk for “the bends” or decompression sickness. This condition occurs when the diver comes back to the surface rapidly, leading to the formation of gas bubbles from formerly dissolved gas in the blood. With Helium, there is lesser amount of the dissolved gas, which helps the diver avoid the bends. Argon, on the other hand, is considered the best gas for the inflation of dry-suits used by scuba divers. The boiling and melting points of noble gases are relatively low. For instance, Helium has a boiling and melting point of -268.95 degrees Celsius (-452.11 degrees Fahrenheit or 4.2 Kelvin). Liquid Neon has a refrigerating capacity, which is 40 times that of liquid helium and 3 times that of liquid hydrogen. Therefore, noble gases are very good refrigerants. Liquid Helium is also used for superconducting magnets. These magnets are very important in physics and medicine. When a doctor suspects that a person’s brain has been damaged, he might request for Magnetic Resonance Imaging (MRI). MRI allows the doctor to “see” the brain, without operating on the patient. Aren’t noble gases fascinating? Who knows, you might even be the next one to discover a rare noble gas compound!