The earth is the third planet from the Sun in our solar system. 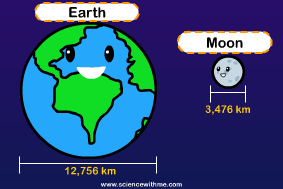 What is a Solar System?

The solar system is like a neighbourhood where our planet (earth) is located. The Solar System is full of other planets, moons, asteroids, comets, and many other things.

What are the planets in the solar system?

Our solar system has nine planets including earth and they all revolve around the sun. The other eight planets are:Mercury, Venus, Mars, Jupiter, Saturn, Uranus, Neptune and Pluto. The moon revolves around the earth. The Moon orbits Earth in 27.3217 days. It takes 365 solar days for planet earth to move around the sun. This is why there are 365 days in one year!

Scientists believe that the moon was once part of the earth but may have been broken off the earth during a massive collision. The moon is much smaller than the earth, about one quarter of the diameter of the Earth.

What is the Earth made up of?

The Earth is also known as the blue planet because from space the Earth looks like a blue marble. Salt-water oceans cover about 71% of the earth and the rest is covered by land but even within the land there are lakes and rivers and lots and lots of water. There are 5 oceans on Earth: Pacific, Indian, Arctic, Southern, Atlantic. It is this abundance of water on Earth’s surface that makes it look blue in color from space.

A blanket of gases surrounds the Earth. This layer is called the earth’s Atmosphere. Without this atmosphere life on earth isn’t possible. It gives us air, water, heat, and protects us against harmful rays from the sun and against meteorites. This layer around the earth is a colorless, odorless, tasteless ‘sea’ of gases, water and fine dust. The atmosphere is composed of several gases. It consists of 78% nitrogen, 21% oxygen, 0.9% argon, 0.03% carbon dioxide, and trace amount of other gases. The Earth’s atmosphere doesn’t really stop anywhere, but just gets thinner and thinner as you move away from the Earth and takes on a bluish hue as you move towards space…this is why the sky is blue!

The shape of the Earth is very close to that of a sphere flattened along the axis from pole to pole so that there is a bulge around the equator. There are two poles, north and south. Earth’s poles are mostly covered by solid ice or sea ice. The planets interior is made up of thick layer of relatively solid mantle, a liquid outer core that generates a magnetic field, and a solid iron inner core. The bulge results from the rotation of the earth. The Earth’s axis is tilted at 23.45 degrees. This tilting is what gives us the four seasons of the year: Summer, Spring, Winter and Autumn. Each day on Earth takes 24 hours as this is the amount of time it takes for the Earth to rotate around it axis once! The Earth’s rotation of the sun is slowing down over time, about a second every 10 years.

How old is the Earth?

If you think this was cool, check out our free Earth worksheets and coloring pages?