Have you ever gone on a hiking trip in a forest?

What is a rainforest?

A rainforest is defined as a forest that experiences high rainfall. In meteorology, which is the study of weather, high rainfall is defined as 68 to 78 inches (1750-2000mm) of rainfall annually. Rainforests are homes to various organisms. It is said that rainforests contain about 40-75% of all living species of the world. If you want to know what the rainforest animals are and what they look like, download our Rainforest Animals Worksheet 1. This contains illustrations of various rainforest animals.

What is the difference between a tropical and a temperate rainforest?

A tropical rainforest is located in the tropics. You can look at the globe or a map of the earth to locate where the Tropic of Cancer and the Tropic of Capricorn are. Countries, which are between these lines are called tropical countries and these have a lot of tropical rainforests. Tropical rainforests can be found in Myanmar, Indonesia, the Philippines, Congo, Central America, South America and some Pacific Islands. A temperate rainforest is found in the temperate regions. Examples of locations of temperate rainforests include the British Columbia Coast, the coastal areas of Scotland, Ireland and Southern Norway, China, Taiwan, Japan, Korea, New Zealand and Australia.

What are rainforest animals?

Rainforest animals are simply animals that inhabit the rainforest. Animals in rainforests include insects and arachnids (spiders), worms, amphibians, reptiles, birds, and mammals. A tropical rainforest can be divided into four main layers, which different kinds of animals inhabit. 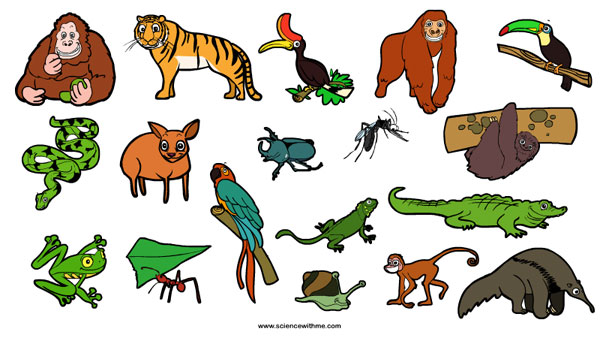 What is the world’s greatest rainforest?

The Amazon rainforest is considered to be the greatest rainforest because of its size and biodiversity. This rainforest has an area of about 1.2 billion acres or 2.5 million square miles. Of the remaining rainforests on earth, the Amazon consists 54% in terms of total area. Some of the unique animals that live in the Amazon include the poison arrow frog, the black caiman (a crocodile), the piranha (a fish), the anaconda (the biggest snake in the whole world), the macaw (a colorful bird), the sloth (a mammal), the gorilla and the orangutan (apes) and many other animals.