Like other vertebrates, you rely on a large amount of energy made available through the metabolism of food and oxygen.

Humans and many other organisms are called “aerobic” organisms because they need oxygen in order to survive. 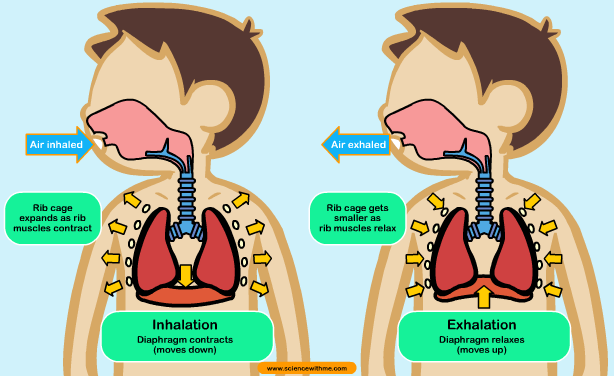 What is the basis of respiration?

There are three main factors that affect respiration. The first is surface-to-volume ratio. The second is ventilation and the third is the presence of transport pigments.

How do invertebrates undergo respiration?

Invertebrates include earthworms, flatworms and sponges. Most of these organisms do not have specialized respiratory systems because respiration occurs through integumentary exchange. This means that gases simply diffuse directly through their body covering or integument. Integumentary exchange occurs best in moist environments, which is the reason why many invertebrates live in water or aquatic habitats. Other invertebrates like mollusks have gills, which are specialized thin-walled organs for respiration. These gills have folded walls, which increase the surface-to-volume ratio, thereby increasing the gas exchange between the organism and the environment. Also considered invertebrates, insects undergo tracheal respiration. This means that insects have internal respiratory surfaces. These internal respiratory surfaces look like book pages, which earned them the name “book lungs". Internal respiration is important because insects live in a relatively dry environment, compared to other invertebrates.

How do vertebrates undergo respiration?

Many fish have gills but some fish, all amphibians, reptiles, birds and mammals have lungs. The development of lungs in higher vertebrates is an important adaptation for the dry terrestrial environment. Compared to gills and the respiratory systems of invertebrates, lungs provide a larger surface-to-volume ratio.

What controls respiration in humans?

You do not consciously control your breathing so what does it? The answer is in your hindrain. Your respiratory center is present in the medulla oblongata, although the pons and the other centers help regulate your breathing. Neurons in your medulla signal to your respiratory muscles when to inhale and exhale. The control of respiration depends on the concentrations of oxygen, carbon dioxide and hydrogen ions in your blood. When there is too much carbon dioxide, too much hydrogen ions or too little oxygen, your respiratory rate increases in order to enhance elimination of these substances. Respiration is essential to life. To learn about human respiration further be sure and watch out Lord Glucose animation.