Have you ever ridden a steam locomotive?

What is a steam engine?

What powers a steam engine?

A steam engine is a type of machine that only relies on steam to facilitate energy. That’s right! Energy from a steam engine comes from the heat that emanates from the boiler, which works much like a huge pot filled with water. Burning coal to fire up the boiler is similar to turning on the stove to boil water in a kettle. Men continuously place coal to burn so that the heat can circulate within the boiler, and as the water continues to boil it releases steam which in turn makes the machine work. It looks so simple that it’s amazing how this can power an engine!

Like steam engines, everything uses energy to function. For example, food that we eat gets digested, and then converted into fuel that our body needs to perform our daily tasks. Energy can be used and converted, but can never disappear. It only passes from one state to another, and steam engines are the perfect example of seeing how it happens. For steam engines to work, energy is derived from four different kinds: chemical energy, heat energy, kinetic energy and then finally, potential energy. 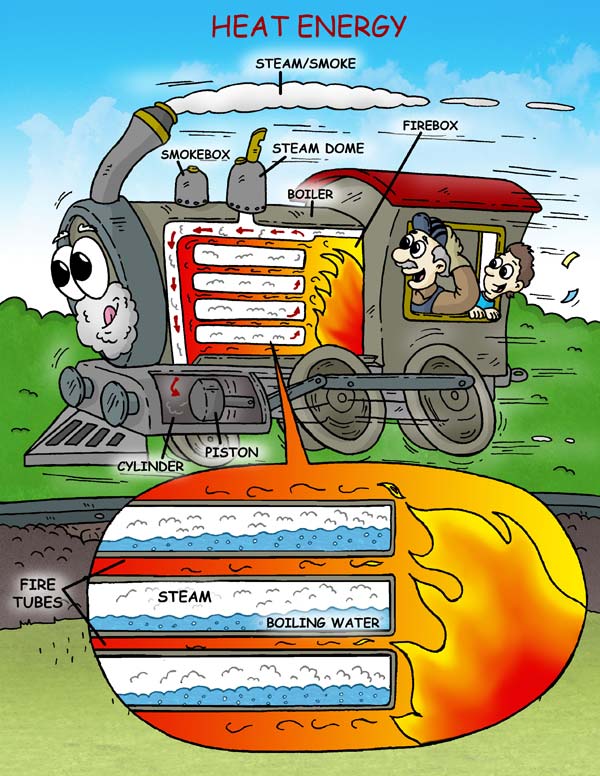 Simply put, steam engines use fire and coal (chemical energy) to boil water and produce steam (heat energy), which in turn pushes the cylinder and piston to drive the movement of the wheels (kinetic). As the wheels turn and move towards a slope or a hill carrying a load (potential energy), it can also go faster when it goes downhill (kinetic energy). This gradual yet steady shift of energy forms makes it possible for a machine like the steam engine to work! Now that you understand that steam engines use energy in various forms to work, don’t you think it’s also important to conserve energy? Without energy, nothing can function properly, and everything including steam engines will not operate as it should be.