Learn about the Human Eye

The human eye is the organ of sight.

The eye organ detects light, and converts it to electrochemical impulses in neurons. Rod and cone cells in the retina allow us see light, figure out perception of depth (how near and far objects are) and to differentiate color.

What are the types of eye?

Not all eyes are the same. Humans have a different eye type from insects (compound eyes). Some eyes are complex and some are simple, like the eyes in larva. There are over 10 different eye types. The human eye can distinguish between 10 million colors and is very similar to a camera because they both have lenses. 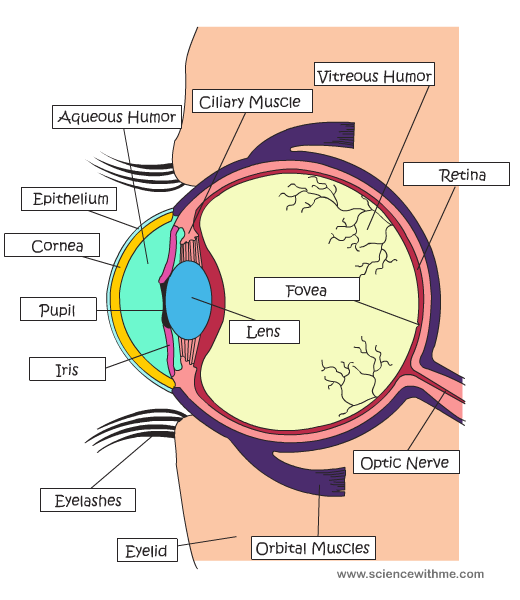 What is an eye made up of?

The human eye is not a full sphere, rather it is a fused two-piece unit. A transparent window at the front of the eye is called the cornea. This lens-like structure focuses the light reaching it. The hole in the center of the iris is called the pupil and the coloured part of the eye is the iris. The retina is very important as it is the inner lining of the eyeball. Receptor cells called rods and cones make up the retina. Black and white vision is seen by the rods and color vision is received by the cones. These messages are then sent to the brain via the optic nerve, which runs from the eye to the brain.

How do eyes work?

The individual components of the eye work in a manner similar to a camera. Each part plays a vital role in providing clear vision. A human eye is like a camera with the cornea, which is like a lens cover. As the eye’s main focusing element, the cornea takes widely diverging rays of light and bends them through the pupil, the dark, round opening in the center of the colored iris. The iris and pupil act like the aperture of a camera.

Next in line is the lens which acts like the lens in a camera, helping to focus light to the back of the eye. The very back of the eye is lined with a layer called the retina which is similar to the film in a camera. The retina is a membrane containing photoreceptor nerve cells that line the inside back wall of the eye. The receptor cells (rods and cones) of the retina change the light rays into electrical impulses and send them through the optic nerve to the brain where an image is perceived. The center 10% of the retina is called the macula. This is responsible for your sharp vision, your reading vision. The peripheral retina is responsible for the peripheral vision. As with the camera, if the “film” is bad in the eye (i.e. the retina), no matter how good the rest of the eye is you will not get a good picture. The human eye is remarkable. It accommodates to changing lighting conditions and focuses light rays originating from various distances from the eye. When all of the components of the eye function properly, light is converted to impulses and conveyed to the brain where an image is perceived.

Why are some eyes brown and other eyes blue?

Why do we blink?

Blinking our eyes keeps them clean and moist. Blinking helps to wash tears over our eyeballs. Also, if something is about to hit our eye, we will blink automatically (for protection).