Learn about the Respiratory System

Have you ever experienced a change of voice or a decreased sense of smell when you have a cold?

Have you ever observed that your breathing becomes faster and more laborious when you actually pay attention to it? These processes illustrate the complexity of your respiratory system. You could survive without food for days to months but if you stop breathing for five minutes or more, your brain would die. Your respiratory system has small involuntary muscles but sometimes, when you need to, you can actually control your breathing.

What are the functions of the respiratory system?

The main function of your respiratory system is for gas exchange. This involves getting oxygen from the atmosphere and expelling carbon dioxide into the environment. Additionally, this system contributes to your voice and allows you to talk, shout and sing. It also serves the sense olfaction (smelling) and allows you to enjoy different scents.

What are the parts of the respiratory system? 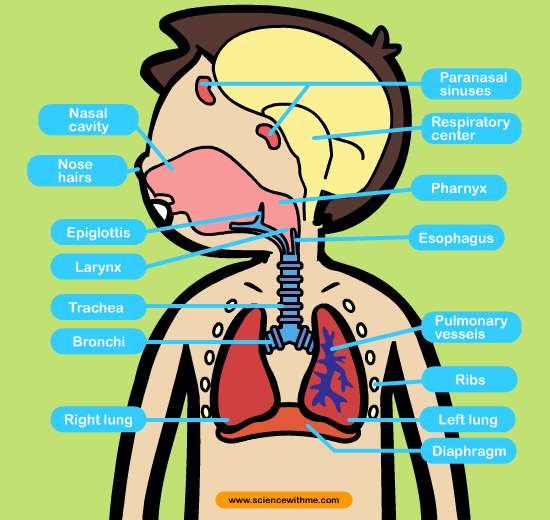 Your respiratory system consists of different organs. This system starts from your nose and mouth and ends in your lungs.

What are the divisions of the respiratory system?

What are the common diseases of the respiratory system?

The common diseases of this system include colds, cough, asthma and chronic obstructive pulmonary disease (COPD). Colds and cough are usually infectious processes caused by viruses and bacteria. Asthma is a condition induced by allergens such as pollen or dust mites. When you have asthma, your bronchioles constrict in response to allergens, leading to difficulty of breathing. In COPD, the alveolar sacs are destroyed and gas exchange becomes greatly reduced. Most of the time, chronic smoking causes this condition. Aside from COPD, smoking also causes lung cancer and other cancers. Therefore, not smoking is the best way to protect your nervous system.