A volcano is generally a mountain where molten rock erupts through the surface or crust of the planet.

An opening or rupture allows hot magma, gases or ash to escape from the earth’s core. In simple terms a volcano is a mountain that opens downward to a pool of molten rock or magma below the surface of the earth.

The Earths surface is made up of plates that are joined together like a jigsaw puzzle. Volcanoes are generally found where tectonic plates intersect on the earth’s surface.

What is the earth core and crust?

The earth’s centre is shaped like a large globe or a core that contains solid iron. The core is surrounded by very hot rock. This hot rock is called mantle and is under huge pressure. Above the mantle is a thin rocky crust.

The earth is made up of three layers;

The Crust: this is the outer most layer and about 18 miles thick. This is the part we live on!

The Mantle: The second layer of the earth is about 1,800 miles thick.

The Core: This is the center of the planet, about 4,000 miles down, made of solid iron and is about the size of the moon. 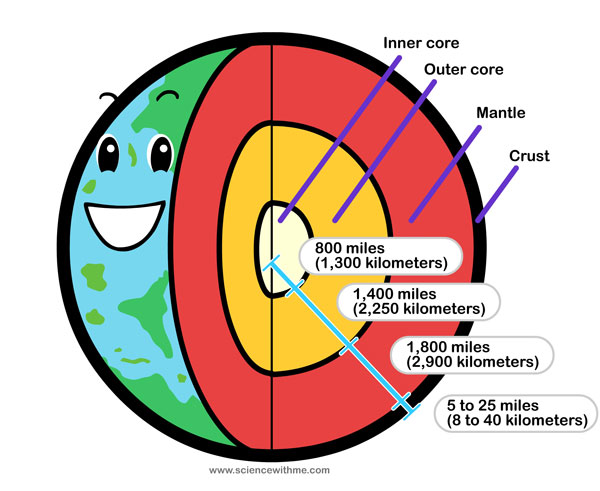 When crust or mantle rock melts underground, it is called magma. When magma reaches the surface it is called Lava.

Why do volcanoes erupt? 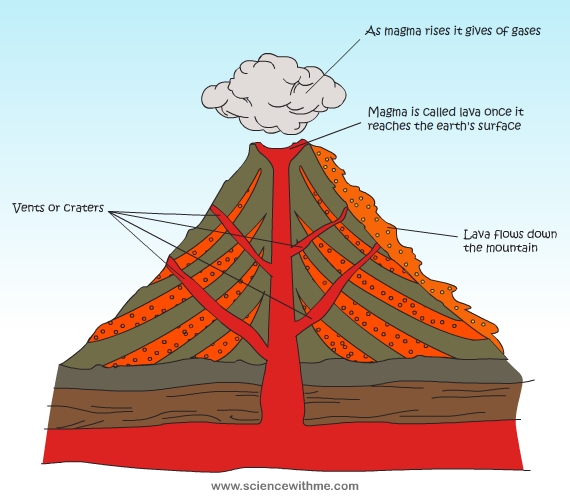 The earth’s surface (crust) is made of plates that sometimes move. In between the crust and the mantle is very hot liquid rock (magma) which gets squeezed up between these plates when they collide. When one plate gets pushed on top of the other a subduction zone is formed. When this happens, a large amount of energy is released as heat.

Deep down, where it is already hot, this extra heat melts the rock, water, and other materials. This is how red-hot magma is made. Where ever this magma finds a weakness in the rock it bursts forth. When magma reaches the surface it is called lava. This is called an eruption. Fresh lava is very dangerous to people, plants and animals because it is extremely hot. However, volcanoes are essential to the earth’s survival because they act like a safety value for the planet (it releases pressure).

The most famous volcano to erupt in the United States was Mount St. Helens in Washington State. It blew on May 18th 1980. 57 people died and 250 homes were destroyed. The rock debris carried by the blast of Mount St. Helen’s eruption traveled as fast as 250 miles per hour!

Why do some volcanoes explode and other don’t?

Not all volcanoes are active. Some may be extinct or dormant and may never explode. There are over 1500 “active” volcanoes in the world and more than 80 of them are under the ocean.

Can we tell if a volcano is going to erupt before it does?

Most active volcanoes have a team of scientist studying them to try and predict if and when it will erupt. Scientists are mainly concerned with hot spots which are more active than volcanoes in non-hot spots. Volcanoes that are found in the middle of plates, often a long, long away from the active edges are considered to be less likely to ever erupt. The Hawaiian Islands volcanoes are like this. One volcano after another has built up from the Pacific Ocean floor in the same spot. At the same time the Pacific plate has been moving. Over thousands of years, a chain of volcanic islands has formed.

After reading about volcanoes here why don’t you get in on the action yourself by downloading our color worksheets and coloring pages to practice what you’ve learned?